Coleman Industrial Construction, Inc. was founded in 1979 with a unique concept. We recognized that industrial markets were facing rapidly changing environmental and mechanical construction needs. Over 40 years later, CIC has built a reputation for outstanding performance in industrial and railroad construction. Our clients consistently recognize us for our quality, safety, responsiveness, consultation and timeliness in our projects.

Our Project Managers average over 22 years experience in the construction industry, which translates not only into proactive consulting and project expertise, but into innovative solutions as well. This level of service is what we know our clients expect, and what sets us apart as an award-winning safety leader in industrial and railroad construction.

The end result of what we want to do.

To be the best in our industry at delivering customized solutions and building a superior product.

Our purpose. Why we exist.

To provide premier industrial construction and consulting services for our clients. With safety as our first priority, we are committed to quality that exceeds expectations and stands the test of time, every time.

The things that are important to us. 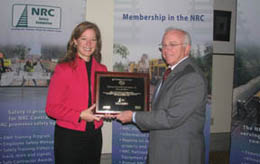 Coleman Industrial Construction, Inc. was showcased as a 2009 winner in Ingram’s “Best Companies to Work For,” which recognizes workplaces of the highest quality in the Greater Kansas City area, those whose management practices, educational and advancement opportunities, benefits and spirit of teamwork set them apart from thousands of companies throughout the region.

Coleman was recently awarded its fifth NRC Safety Award, setting an industry-leading record in this category. Based on criteria established by the NRC Safety Committee, this award recognizes exemplary performance by companies (employees and management) in the creation of a safe work environment within the Railroad Construction Industry.

Coleman Industrial Construction is proud to have been chosen among many other worthy candidates to receive this coveted award. Kansas City Small Business Monthly launched the annual 25 Under 25® Awards to recognize 25 outstanding Kansas City area businesses with under 25 employees.

Until the 25 Under 25® Awards, no formal recognition program existed in the Kansas City area that specifically targeted businesses with under 25 employees. Yet this segment of business comprises the largest number of companies both locally and nationally, with roughly 83 percent of Kansas City area and 86 percent of businesses nationwide employing 19 or fewer employees.

The Ingram’s annual listing recognizes local companies with strong revenue growth from 2003 to 2006.

The purpose of The Builders’ Association Safety Excellence Awards Program is to recognize member companies with elite safety and health programs.